Franklin’s Formula for the Future: Experimentation to Experiential Learning 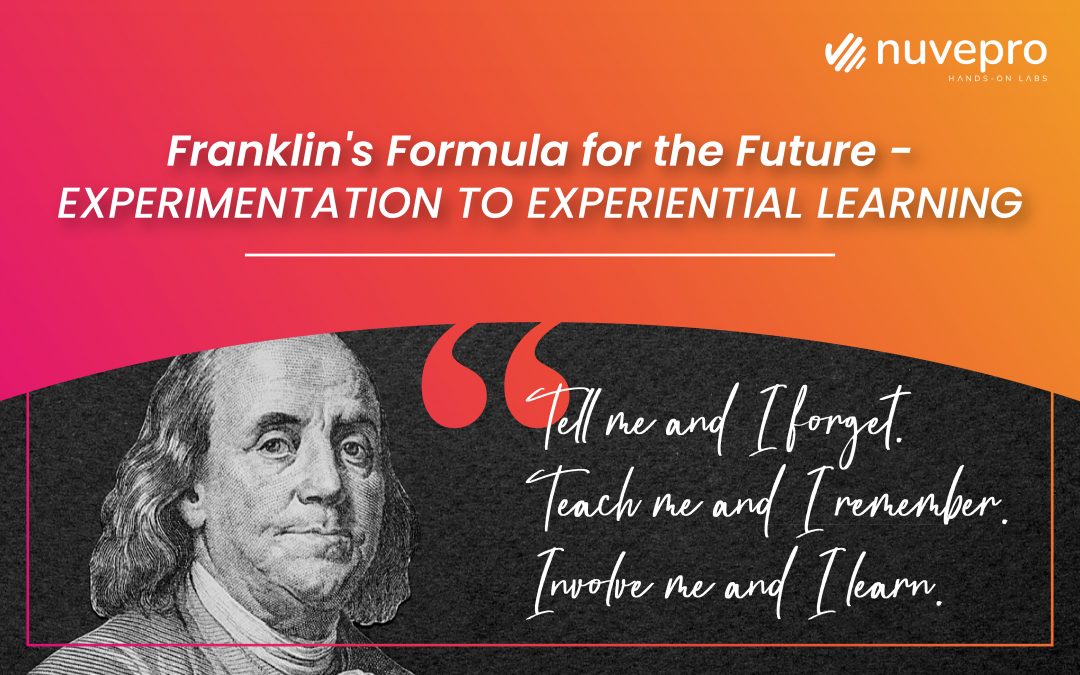 “Tell me, and I forget. Teach me, and I remember. Involve me and I learn.’’

For a long time, there has been an ongoing debate about what the right type of learning is. Many educators believe that traditional, theoretical teaching is the most effective learning method, whereas few others believe that teaching through practice is the most efficient method. To better understand what the most effective form of learning is, here is a short insight into the life of a prominent philosopher-scientist. Experiential learning, also known as “learning by doing,” is a method of teaching and practising relevant skills through hands-on experiences.

This approach emphasises active involvement and participation and has been shown to be an efficient way to teach and practise new skills. Benjamin Franklin, known for his emphasis on self-education and lifelong learning, is often cited as an example of the benefits of experiential learning. His approach to learning, which involved hands-on experimentation and observation, continues to be an inspiration for educators and organisations today.

Franklin was curious and eager to learn, but he found that traditional forms of education didn’t always resonate with him. He craved hands-on, experiential learning.

So he set out on a journey of self-discovery and experimentation. He taught himself how to read and write by borrowing books from a local library, and he practised what he learned by writing articles for a newspaper. He learned about electricity by conducting his own experiments with static electricity and lightning. He even taught himself how to swim by jumping into a lake and figuring out how to stay afloat.

Through these experiences, Benjamin Franklin discovered that he learned best by doing. He realised that by teaching and practising through experiential learning, he could acquire knowledge and skills much faster than through traditional methods.

As he grew older and became one of the most respected and accomplished figures of his time, he realised that his approach to learning could be beneficial to others too. He began to teach and mentor others through experiential learning, passing on the skills and knowledge he had acquired through his own experiences.

One famous example of Franklin’s experiential learning is his method of self-improvement, which he called his “13 virtues.” Franklin identified 13 traits that he believed were imperative for a person to possess, such as temperance, silence, and humility, and he worked on developing each one. He kept a notebook in which he tracked his progress and reflected on his failures and successes. He also wrote a letter to his friend describing how he was trying to improve himself using his own method.

Another example of Franklin’s experiential learning is his scientific experimentation. He conducted many experiments in fields such as electricity, meteorology, bifocals, lightning rods, and map-making. He also published a scientific journal, “Poor Richard’s Almanack,” which disseminated his findings and helped popularise science among the public.

Franklin’s approach to gaining knowledge through experience is still highly regarded today and is often cited as an example of successful self-education. He believed in acting and learning from the consequences, a key principle of experiential learning. We are correct when we say that experiential learning is not a revolutionary concept. The idea that people learn best through hands-on experience and active participation has been around for centuries, as we see with Franklin’s experiments. In today’s world, many educators and companies embrace experiential learning as an effective way to teach and practise new skills.

Engagement, however, is the key that is more easily seen and has a significant impact in the workplace. Modern workplaces are constantly evolving and require employees and learners to be adaptable and possess a diverse set of skills. Hands-on learning and learning by doing can be effective ways to meet these demands, as they bring tremendous benefits to both employees and organisations in the future.

Making an investment in reskilling and upskilling is less expensive than recruiting and training. Reskilling or upskilling the workforce by an organisation creates a fully developed, well-trained workforce, and enhances its employees’ capabilities. At a time when technology is constantly improving and pushing for change in the workplace, it is more imperative than ever for employees and learners worldwide to ensure that current skills are relevant.

This old formula of experiential learning has helped several learners and organisations be future-ready for the prevalent skills gap. Let us look to our leaders in education and knowledge for the most inspiring examples of learning the right way and how we should be learning from now on.